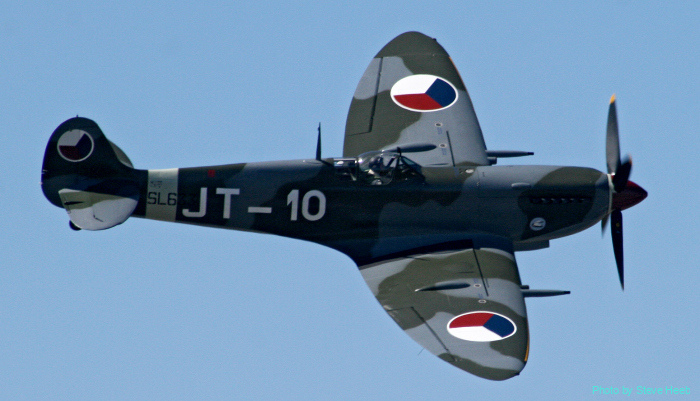 Supermarine Spitfire examples I have photographed, including the Mk 1, Mk Vb, Mk VIII, Mk IX (including a 2-seater), Mk XVI and the final F24 variant. These were taken at the Imperial War Museums at Duxford and London, and the RAF Museum in London were taken during visits to England. Flying examples were photographed during air shows at the Flying Heritage Collection in Everett, Wash. The Spitfire Mk XVI was at the Evergreen Aviation Museum, and a pair of Spitfire examples at the NMoUSAF.

In 2019, I photographed the Silver Spitfire when it visited the HFF at Paine Field. This stop was to perform its 50-hour maintenance check during the team’s trip around the world.

This aircraft flew during the Battle of Britain with 609 Squadron. Among the pilots who flew it were aces Noel Agazarian, who had two victories in this aircraft, and John Dundas, who scored one.

This Spitfire was formerly owned by the late actor Cliff Robertson. From 1972 until 1994, it was flown by Jerry Billing, a Canadian Second World War Spitfire pilot, until he retired from flying Spitfires at age 75. Billing set a record for most Spitfire experience while flying this Spitfire (52?1?2 years). It wears the markings and codes it wore when serving with No. 126 Squadron at RAF Sawbridgeworth, Hertfordshire in mid to late 1944 as MK923 / 5J-Z.

This plane was destroyed in a crash in 2000 that claimed the lives of Greg McCurrach and Norman Lees. Rebuilt to airworthy and was wearing Dutch markings when I photographed it in 2008.

When the family visited England in June 2019, I was able to photograph PV202 wearing new colors and in action.

MH434 shot down an Fw 190 in 1943 while serving on 222 Squadron. This aircraft has been featured at European air shows and has been in many other TV and films including Operation Crossbow, The Longest Day, Battle of Britain, A Bridge Too Far, Piece of Cake and Foyle’s War