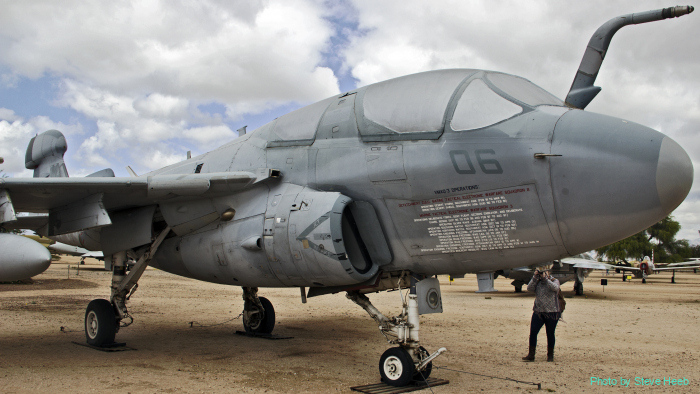 Examples of A-6E Intruders that I have photographed on board the USS Yorktown at Patriots Point and at the Smithsonian NASM. The pics Charleston, SC, were taken during the 447th BG reunion in October 2013. The National Air & Space Museum visit was in 2015 during the 447th BG reunion in Washington DC. Armament is featured on the Intruder at the Museum of Flight, and the gate guards at Whidbey Island offer a look under the planes. The EA-6B at an airshow at McChord AFB shows some pretty good detail shots under the Prowler. In addition to the A-6E 155713 that I photographed at the Pima Air Museum, they also have an EA-6B 158542 “FrankenProwler” made from three ADVCAP airframes combined into one craft. Other examples in the A-6 family were photographed at Palm Springs and the Yanks Air Museum in Chino.